Menu
Log in
Register
Install the app
You are using an out of date browser. It may not display this or other websites correctly.
You should upgrade or use an alternative browser.

We have one custom application that calls multiple custom consumer BSSVs at different points of execution. We are testing this application locally before deploying it to the server. We have deployed both the consumer BSSVs to the JDeveloper local Integrated WLS- 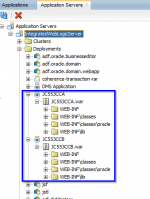 ​
But I see this requested BSSV class in the deployments section of the local integrated WLS, not sure why it cannot be found- 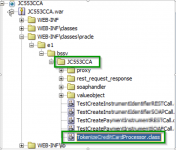 ​
This error occurs only for one of the two consumer BSSV calls, the other call is successfully invoked.

To resolve this error, I have to "undeploy" the working consumer BSSV(say BSSV#2) from the local integrated WLS. And redeploy the consumer BSSV(BSSV#1) whose call was going into error. After that call to BSSV#1 now succeeds.

Now, if I were to redeploy BSSV#2 to the local Integrated WLS, then roles are reversed and now the calls to this BSSV#2 fail with same errors.

This leads us to conclude that only one consumer BSSV deployment can be tested at one time from the local JDeveloper Integrated WLS :-S ! This prevents us from testing the entire application at one go, instead we have had to divide it into smaller test applications, one for each consumer BSSV call.

Has anyone else experienced this issue with testing multiple consumer BSSVs simultaneously on the local JDeveloper Integrated WLS?

I am attaching a document that describes how to get past this. I created it as an internal document for our organization so there are a few things specific to our org. and references some test objects that we use but in general if you follow the steps it should work. To get the size down to be able to attach I had to zip it.

Hi Brian - We are having the same BSSV issue. I'm not able to open the pdf within the zip file. Can you please attach it again.

Hi Brian - I was able to download the pdf file and your steps worked!! Thank you.